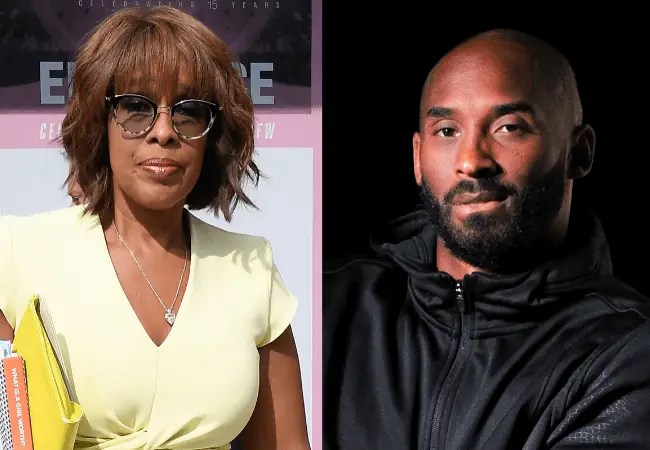 Gayle King, who is a journalist on CBS This Morning and known for her controversial interviews, interviewed the late Kobe Bryant’s friend, WNBA legend, Lisa Leslie.

A clip from the interview was shared on Twitter and that has now angered lots of people, including Snoop Dogg, 50 Cent, and millions of Kobe Bryant’s fans.

During the interview, she asked a series of questions, including whether Leslie thinks, as a woman, that Bryant’s legacy had been besmirched by his rape allegation.

“Is it complicated for you, as a woman, as a WNBA player?” King asks in the interview done following Bryant’s death in a 26 January helicopter crash that also killed his daughter and seven others.

Leslie, a longtime friend of the NBA legend, says, “It’s not complicated for me at all.”

Bryant was not the “kind of person that would do something to violate a woman or be aggressive in that way,” Leslie says. “That’s just not the person that I know.”

King suggests that Leslie, as Bryant’s friend, would not be able to see him in that way.

.@WNBA legend @LisaLeslie told @GayleKing that Kobe Bryant's legacy is "not complicated" for her despite his 2003 rape accusation.

"I don't think it's something that we should keep hanging over his legacy." https://t.co/qj6MVvOaqX pic.twitter.com/9qtVORobLO

In 2003, Bryant was charged with sexually assaulting a 19-year-old hotel employee. The case was dismissed because the accuser refused to testify and a civil case was settled instead.

Bryant insisted that he did have sexual relations with the woman but that it was consensual. At this time, he was married to his wife, Vanessa Bryant.

Celebrities, including Snoop Dogg, responded to the video, calling King’s question “out of pocket” and accused King and BFF, Oprah of trying to tarnish the reputation of black men.

Following the heavy backlash, King took to social media to explain her side of the story. She said:

“I know that if I had only seen the clip that you saw, I would be extremely angry with me too. I am mortified. I’m embarrassed and I am very angry,” she said.

“Unbeknownst to me, my network put up a clip from a very wide-ranging interview, totally taken out of context and when you see it that way, it’s very jarring.”

“I felt really good about the interview. So for the network to take the most salacious part, when taken out of context, and put it up online for people who didn’t see the whole interview is very upsetting to me,” she explained.

“There will be a very intense discussion about that.”

CBS Network also responded to King’s statement, saying that the clip shared on Twitter “did not reflect the nature and tone of the full interview.”

“Gayle conducted a thoughtful, wide-ranging interview with Lisa Leslie about the legacy of Kobe Bryant,” the statement read. “We are addressing the internal process that led to this and changes have already been made.”

Despite all the explanations, however, people are still not satisfied, citing many instances in the past where Gayle King and Oprah allegedly tried to ruin the legacies of black men including Michael Jackson.

Many tweets have been shared on Twitter, calling for King and Oprah’s heads over allegations that they don’t treat white men how they treat black men.

See some tweets below:

A real G has spoken… the word is out Gayle and Oprah officially cancelled ?????#cancelgayleking #CancelOprah pic.twitter.com/IYhPvzpJuQ

Ugh, I don’t know what’s worse on my TL, seeing Gayle Kings face in close up, or listening to the verbal diarrhoea that’s coming out of her mouth trying to make up excuses for her shady arse interview? #RIPKobeBryant

It isn't surprising to me, but media including Gayle King and all these white women with an agenda, know that there is footage of Kobe addressing this in his own words, owning up to it & vowing to be a better person, but they have likely not shown you this clip. pic.twitter.com/hPCz4aaFRK

The frustrating part about #GayleKing interview is Lisa Leslie kept saying “that’s not the man I knew” & Gayle kept trying to corner her into swaying from that. Lisa said what she said, so let’s… pic.twitter.com/qhLnjTApNZ

Tired of these corpowrite hands overlooking black faces to talk to the world.What stops a black (GAYLE) in a modern journalist suit from telling their bossman’ I shouldnt ask that question because it’s inappropriate.’ White USA business need to understand they rent they don’t OWN pic.twitter.com/rSX5nPP7xB

Childish Gambino accused of stealing ‘This is America’ from another rapper

Actor Yomi Fabiyi speaks on being responsible with our rights as Nigerians
AMVCA 2020: ‘Living in Bondage’, ‘God calling’ lead with 11 nominations each| See full list
Comment