Although her nationality is Canadian, she was born to Greek parents. Marie did not originally have any plans to become an actress, but her talent attracted many opportunities to her, and she grabbed them with both hands.

Avgeropoulos was the subject of a scandal after she was arrested for domestic violence against her boyfriend following an aggressive reaction to a new drug that she was taking. We will look at this in detail later, now, let us familiarise ourselves with the top facts about this actress.

Marie Avgeropoulos was born on 17 June 1986 in Thunder Bay, Ontario, Canada, to Philip and Augusta Avgeropoulos. It is unknown if she has siblings or not. When she was younger though, she enjoyed playing outdoors, and she grew up fishing, camping, and hunting.

All of these experiences must have prepared her for the tough life on the set of the show “The 100”. What would get her into the entertainment industry, however, was drumming, which she started doing when she was 16.

Marie Avgeropoulos didn’t know that she would be an actress. In fact, she did not even aspire to it. The lovely actress studied broadcast journalism in Canada before she left for Europe with only a backpack in order to go soul searching. Several months later, she returned to Canada and decided to settle down in Vancouver.

She has spoken about her voice change which occurred when Marie Avgeropoulos was 20 years old, and she underwent surgery to remove a huge tumor in her chest and throat. During the procedure, her vocal cords had to be removed and then put back in. The actress said that the procedure affected her voice.

She said at the 2019 Dutch Comic-Con, “But it’s working for me, you know, I got my vocal cords ripped out a long time ago and put back in because I had a big tumor removed from my chest, and, yeah, yeah.

“I have a scar right here, nobody’s noticed after all these years but here it is. That’s what works for me as an actress I guess and it’s my trophy, it reminds me that I’m strong as Marie while I’m playing Octavia.”

Read also: Lorraine Bracco biography: What happened to star of “The Sopranos” and “Goodfellas”?

Avgeropoulos has the cutest pet, a French bulldog named Soleil. In fact, the cutie even has an Instagram page dedicated to her.

Who is Marie Avgeropoulos husband? This gorgeous actress is not married at the moment, but she is currently dating fellow Canadian actor Alain Moussi.

Moussi is a Canadian actor, stuntman, and martial artist who plays the lead role of Kurt Sloane in the reboot of the Kickboxer series, “Kickboxer: Vengeance” (2016) and “Kickboxer: Retaliation” (2018).

She has been in several high-profile relationships, however. In 2013, she was linked to the actor Taylor Lautner, who plays Jacob Black in The Twilight Saga film series.

The two started dating after meeting and falling in love on the set of the film “Tracer”. In 2015, however, they broke up, and representatives for Lautner said they broke up amicably.

She has also been linked to actor Shawn Roberts, whom she met while filming the comedy “I Love You, Beth Cooper” (2009).

So, what happened to Marie Avgeropoulos? She ran into some legal trouble in one of her personal relationships. On 5 August 2018, she and her boyfriend were driving together on the Ventura Freeway when they started to argue.

During their argument, she reportedly struck her boyfriend on his head, arms, and neck, resulting in minor injuries. Her boyfriend called 911, and the police arrested the actress. Although he begged for her not to be taken away, she was still arrested.

Avgeropoulos was charged with domestic violence, but her boyfriend wanted the charges dropped, stating that she does not pose a threat. It turned out that the actress had taken new medication and had drunk alcohol on that same night, which caused her to react strangely and become aggressive.

All the charges were dropped, and the case was dismissed. Her boyfriend stated that he had called the police on that day in hopes that they would diffuse the situation instead of arresting the actress.

How did Marie Avgeropoulos get a start in her career? Well, it’s mostly thanks to her friend who invited her for an audition. Here’s how things went: When Marie was 21, one of her friends invited her to a casting call in Vancouver, which happened to be looking for drummers.

Recall that Marie had been drumming for five years at this point. Well, a talent agent recognised her talent and invited her to appear in several national commercials. This is the perfect example of opportunity meeting preparation, isn’t it?

In 2010, Avgeropoulos was cast in the film “Hunt To Kill”, which became her breakout role, and helped her secure more recognition. She played the role of Kim Rhodes. Although the 2010 film “Percy Jackson & the Olympians: The Lightning Thief” received mixed reviews, Avgeropoulos’ performance received praise and got her a lot of attention.

In 2013, she secured a recurring role in The CW series “Cult”. The series did not do well, however, failing to attract viewers, and it was cancelled after seven episodes. The remaining six episodes aired later that summer.

The silver lining came not long after “Cult” was cancelled, CW rehired her to play the part of Octavia Blake in the hit TV show “The 100”. “The 100”, also pronounced The One Hundred, was an incredible show, and until its seventh season, which was concluded in 2020, fans were spellbound by it, so much that the show became a cult hit.

Avgeropoulos is not currently working on any TV shows, but she does have a film that is in pre-production titled “Butterfly in The Typewriter”. She plays Jean Ann Jollett in the upcoming project.

This gifted actress has earned recognition for her acting. For example, for her wonderful performance in the film “Numb”, she was nominated at the 2015 Leo Awards for Best Supporting Performance by a Female in a Motion Picture.

Marie Avgeropoulos has been in a host of movies and TV shows since she launched her career in 2009 with “I Love You, Beth Cooper”.

Below is a list of films and TV shows that Marie Avgeropoulos has appeared in alongside the year that it was released or aired, and the character that she played in the production.

The bulk of Marie Avgeropoulos net worth comes from her work in film and TV. She has appeared in quite a number of films which have fattened her purse. As a result of all her exploits in the entertainment industry, Avgeropoulos has amassed a healthy net worth of 2 million dollars ($2 million), according to Celebrity Net Worth.

This stunning actress is active on social media, where she shares details about her personal life (including the cutest pictures with her boyfriend), clips from movies that she is working on, and juicy content that you can only get from her.

Of course, some internet users are following the actress because of her hot photos which shows off her banging body. Here is one of Marie Avgeropoulos hot photos that have been circulating online. 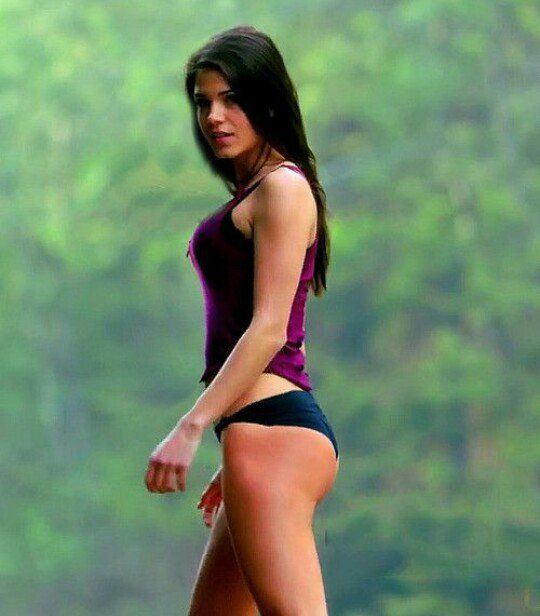 Marie Avgeropoulos is a talented actress who got her entry into the entertainment industry by accident and through a skill that she had cultivated since she was young. Since then, she has appeared in many movies and TV shows and received nominations for a number of awards.

After her amazing performance in the CW series “The 100”, she has gained more renown and fans than before. We can’t wait to see her next projects and witness her subsequent exploits in Hollywood and beyond.

Simbiat
Simbiat studied Computer Science at the University of Lagos. She enjoys doing research and spends most of her time reading. She can be contacted at simbiat@sidomexuniversal.com.
Previous articleKaren Fukuhara biography: Kimiko The Boys actress body, age and height

Karen Fukuhara is an American actress of Japanese descent, born and raised in Los Angeles, who made a name for herself in Hollywood following...
Read more
Celebrity Biography

Do you know that popular American online Twitch streamer, Mizkif, who was born on 16 February 1995 as Matthew Rinaudo is also one of...
Read more
Celebrity Biography

Lorraine Bracco is an American actress whose standout features are her husky voice and her Brooklyn accent since she was born in New York....
Read more
Celebrity Biography

Marie Avgeropoulos is a 35-year-old Canadian actress who played Octavia Blake on the well-loved CW TV show, "The 100". She was also in films...
Read more

Karen Fukuhara is an American actress of Japanese descent, born and raised in Los Angeles, who made a name for herself in Hollywood following...
Read more

Most popular song lyrics of 2020 according to Google search volume

"WAP", "GOOBA", "Savage Love", "Dynamite" and others make up the list of most popular song lyrics searched on Google in 2020, see complete compilation. As...
Read more

Do you know that popular American online Twitch streamer, Mizkif, who was born on 16 February 1995 as Matthew Rinaudo is also one of...
Read more

Lorraine Bracco is an American actress whose standout features are her husky voice and her Brooklyn accent since she was born in New York....
Read more

Jackie on Black Widow, Fear Street Part III, Loki season finale, and other films to see this weekend
Jackie on Jonathan Taylor Thomas now, Home Improvement, Lion King and Pinocchio star today
Jackie on Lorraine Bracco biography: What happened to star of “The Sopranos” and “Goodfellas”?
Jackie on Twitch streamer Mizkif Biography: real name, family, girlfriend, career and net worth
Chuks on What do you know about Kim Ju-Ae? – See facts about her parents, Kim Jong Un and Ri Sol-Ju