Peruzzi released his second studio album “Rum and Boogie” on Friday, 9 April 2021, featuring 20 tracks split in two. Per the tracklisting arrangement, 10 songs cater to the “Rum” aspect of the album while the others fall under the “Boogie” section.

It is still too early to give an in-depth review of the album and rushed reviews either end up not doing justice to a great project or give it undue praise. We avoid that trap and instead bring other details that are immediately available.

The album “Rum and Boogie” is distributed by The Plug Entertainment, a music publishing, licensing, and distribution company owned by Asa Asika and Bizzle Osikoya. The question about what record label owns the rights to the album is tricky and important given the singer’s infamous spat with former employers, Golden Boy Entertainment.

A few days before Peruzzi launched his album, the controversy once again reared its head. The singer had gone on the Nancy Isime Show to taunt his former boss Patrick Anyaene. He accused him of arresting him recently after he returned to Lagos from a show in Abuja.

“You say you have an artist, right and that you have a contract and the artist breached the contract. That means if you go to court, you would win [the case] for sure right? So why don’t you just go there?” Peruzzi said.

Anyaene reposted the video on his Twitter page and dished out his own retort, “OK I have kept quiet for a minute because ur lawyers begged I stopped social media until after the court case. I arrested u and you cried as usual, I have so much to leak but the contract is enough. you’re Clown for real. [sic]”

While the matter did not go beyond these jibes, it reveals that the record label and contract breach issues between both parties are still in court. Thus, it is interesting that The Plug Entertainment is distributing “Rum and Boogie” and not Davido’s DMW, whom Peruzzi has been hanging out with. 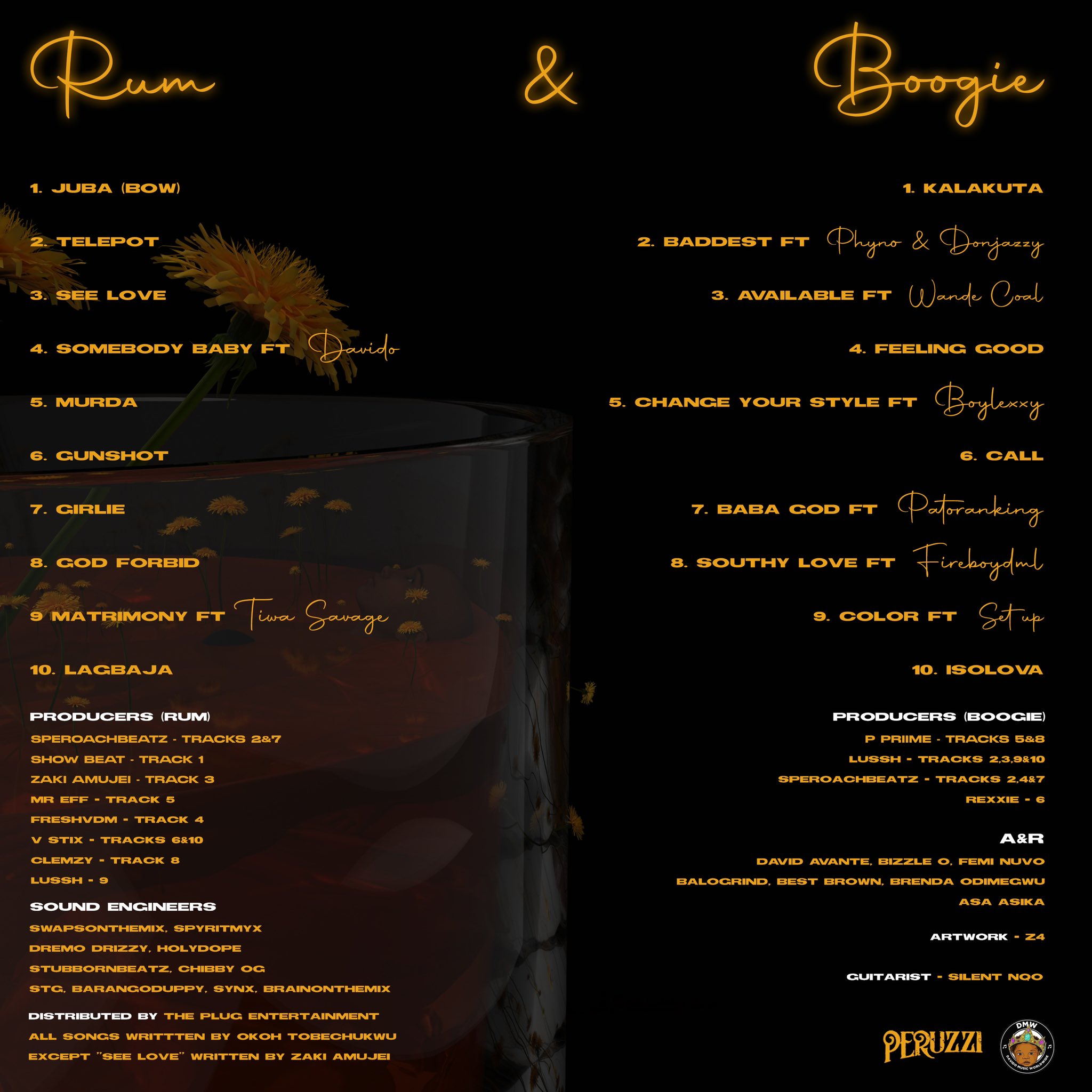 The album itself comes with 20 tracks, twice as much as his debut album “Huncho Vibes” had. It also has more features than his previous album had with Davido contributing to the pre-released “Somebody Baby” track that has been doing well on Nigerian music charts. The “Southy Love” single which features Fireboy DML also makes it on the album.

See the complete “Rum and Boogie” tracklist below:

Wait for our review of “Rum and Boogie”!

Obinna
Obinna is a fiction writer from Lagos, Nigeria, and grew up loving comic book characters and superheroes. He watches lots of action films and writes entertainment and technology articles. He is also interested in science and how things work.
Previous articleWhat Netflix and Sony Pictures latest film deal means
Next articleIndigo color: indigo blue, violet vs purple and roygbiv

British actor Tom Felton who is known for his character Draco Malfoy in the Harry Potter movies, collapsed while playing at a celebrity golf exhibition...
Read more
Celebrities

British actor Tom Felton who is known for his character Draco Malfoy in the Harry Potter movies, collapsed while playing at a celebrity golf exhibition...
Read more

I heard somewhere this week that when you say "Without any further ado", you have in fact just further 'adoed' a little. In that...
Read more

Linda Evangelista speaks about being deformed by cosmetic surgery

Supermodel Linda Evangelista has finally spoken up about being "permanently deformed" by a cosmetic surgery. The Canadian model said she had developed paradoxical adipose hyperplasia...
Read more